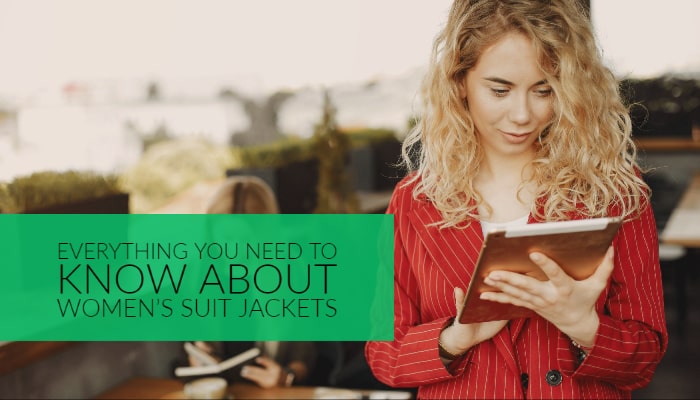 As more and more women are taking up jobs in corporate sectors, the attire for them is becoming increasingly androgynous, especially with the tailoring of suits for women. While the suits are sold as two or three piece sets, the suit jackets, purchased separately, allow them to mix and match with different shirts and trousers. So be it a business conference or an interview at an IT company, you would like to have a few jackets in your wardrobe to mark your success in every situation.

Single breasted or double breasted style- Which is best suited for you?

On one hand, the single breast women’s suit jackets come in two halves that are buttoned together at the front. This is more of a classic style which is still widely used for formal and black tie events. Though the number of buttons varies from one style to the other, standard single breast jacket features two or three buttons at large with a notch styled lapel.

On the other hand, more formal than the former a double breasted suit jacket has four to eight buttons at the front and carries a peak lapel that defines and flatters the shoulder blades. Now since double breasted jackets require extra fabric, they have become almost obsolete, especially after the World wars and as a result single breasted style steals all the popularity.

While you are purchasing a suit jacket, you must pay attention to the features of the jackets. Based on these features you can wear the right ones to the right places.

On a suit jacket, the proper cut ensures proper fit and frames a woman’s body in a stunning way. The silhouette should appear in such a way that it does not droop or tug at the end while she stands or sits comfortably.

These jackets are available with both full and three-quarter arms lengths. While the full length sleeves fall on top of the hands, the ones in three-quarter length reach halfway between the elbow and the wrist of the wearer.

The jacket must stay snug over the shoulders with the arm threads lying at their natural edge. If the seams expands to the arms, the shoulder areas of the jacket appear wider. On the other hand, the narrow-fitted shoulders hinder the movement of the arms and make the outfit feel uncomfortable on a woman’s body.

Since no two women of different body types can wear the same kind of jacket, it is essential to consider their torso lengths while finding the suitable ones for them. While the lower part should rest on the hips of the wearers, the entire garment must be able to highlight the flattering features and cover the troublesome areas.

The bust size of a woman has a significant role behind the proper fit of the jacket on her body. While the ones with lower set buttons fit well on bustier women and reduce unnecessary gaping, the hip pockets and small lapels add to their flattering shapes. On the contrary, leaner women must consider having those jackets that have larger lapels and higher placed buttons, adding bulk to the chest.

Those retailers who are willing to expand their stocks with these jackets must get in touch with a trustworthy wholesale suit manufacturer online and place their orders in bulk.