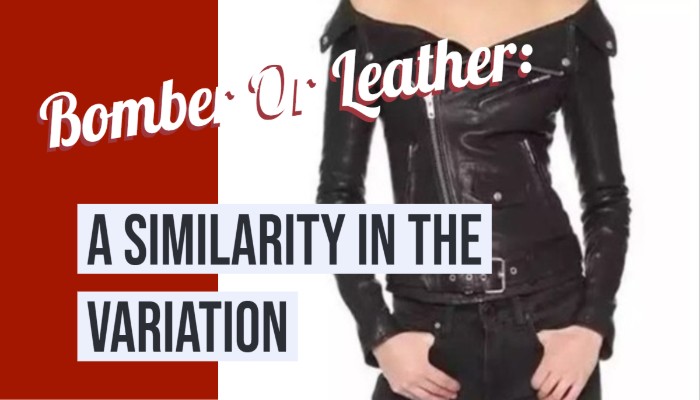 Since the early 1900s, there have been significant changes brought over to the outerwear fashion. Much inspired by the military styles, leather jackets have been introduced in the fashion circuit, and ever since they have been gaining popularity. Each era has its own representation of the uber-stylish leather jackets but one thing has remained constant for it- the appeal.

Though bombers came into existence as a variation of its parent form, the leather jackets, they too were fast enough to garner attention from the crowd. Both came into the close competition and were pitted against each other but they emerged victorious individually. Different styles and textures were developed for both and they equally shared the spotlight. But the real question remains, which one to pick for the summer? How to wear them for the summer this season?

To answer these questions, the case of each jacket has been picked and pondered upon. Keep scrolling down for detailed information.

Leather jacket: The stud of the outerwear world

While leather jackets have been a favorite for a long time, there is a proper reason to justify their popularity. The fabric has been successful against strong winds and has endured harsh weather, and not once have they sacrificed their charm. With enough tweaks, much broader cuts and styles have been introduced. Furthermore, a wholesale leather jacket that is available with the reputed manufacturers come in quite a few shades like the classic black, brown and tan. They have become the favorite piece of clothing for men worldwide and can be worn with other outfits well. Team it with a t-shirt and pair of jeans for that raunchy cool dude approach. The boldness of the jacket has been dawned by a number of style icons and it still continues to reign high.

Bomber jacket: The variety in variation

Zip it up or leave it open, the thing about the bomber is it is just as sexy anyway you wear them. Ever since having come to the circuit, the fast growth of the bomber jackets has proved that they are supreme in their creation and can hardly be replaced. If in the recent years you have not owned a bomber jacket, you are missing out on a big opportunity to flaunt your bad ass side elegantly.

Another advantage of the bomber jackets is that they can be worn in all seasons, regardless of the temperature. Also, team them with the basic casual attire of yours (even with the pajamas) and create an impression everlasting. The flamboyant approach of the bombers complemented by their availability in numerous shades and embellishments makes them a perfect pick.

Thus, it is really hard to say which to pick. While the leather wins on its practical yet stylish approach, the bombers are known for being every-man’s wear. It is safe to say, pick one of each and make this summer an extravagant affair. Prominent manufacturers who have an inventory of leather and bomber jacket wholesale can be purchased by the retailers at discounted price.